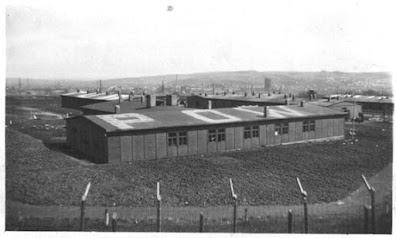 In Part 2 of this blog about Liverpool-based magician ‘Eric’ Ryder, we learn how he used his magic skills to boost morale in Stalag VIII-B prisoner-of-war camp. ‘In the bag’  All Halifax L9566’s crew members survived their forced landing in the early morning of 11 September 1941, but they were quickly captured by German forces.  Sergeant ‘Eric’ Ryder and  his colleagues were first sent to  Dulag Luft (Oberursel) , an interrogation and processing camp for captured air crew near Frankfurt.  One of the first individuals Ryder met in this camp was Lieutenant Commander John Casson from the Royal Navy ’ s Fleet Air Arm. While most prisoners only spent a few days or weeks in the Dulag Luft , Casson was a member of the permanent staff. Along with twenty others, he ran the camp inside the wire, helping new prisoners settle in, and liaising  with the German commandant and his staff. Casson was caught in Norway in June 1940. Coincidentally, Casson was a keen amateur magician and a member of The M
Post a Comment
Read more 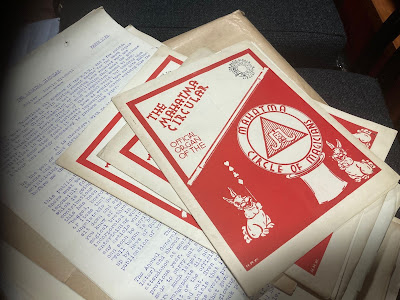 Hidden away in the magic column of a 1942 edition of The World’s Fair (a newspaper for entertainers) is this single sentence:  “From The Mahatma Circular, we learn that a member of MAHATMA CIRCLE OF MAGICIANS, Sergeant Charles Ryder, 947433, is a prisoner of war in Stalag VIII-B, Germany (P.O. War No. 9592).” This is a tantalising fleck of information for a blog focused on magicians in World War Two. I pulled on that thread and weaved together the additional information I found into the blog below…  The Mahatma Circle of Magicians was a magic society based in Liverpool, England. Founded in 1915, in the second year of World War One, it was a breakaway club from the Northern Magical Society.  From 1915 to 1955, the society’s official in-house magazine was The Mahatma Circular . Evidently, The World’s Fair had picked up the news about Ryder in the Circular and repeated it.  Early Twentieth Century copies of  The Mahatma Circular (Source: The Magic Circle) Pre-War  I hoped to discover mor
Post a Comment
Read more 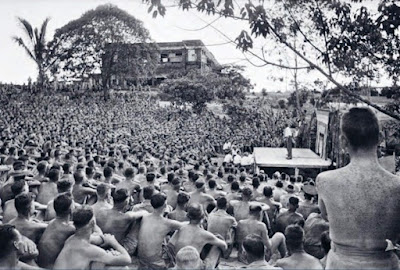 The benefits of magic performances for prisoners-of-war For Prisoners-of-War (POWs) of all theatres of war, entertainment in prison camps provided much needed enjoyment and escapism. During the performances, the entertainers and their audiences might escape for an hour or two into a happier world. A performer on an improvised stage and open-air auditorium in the Changi POW complex (Source: Public domain) Working creatively and cooperatively with other performers and stage staff, gave those involved a focused goal and a sense of team spirit. It kept their minds active and positive. For British POW-magician Fergus Anckorn, the interactions with other actors during rehearsals were a major factor in his survival: “ I remember when we rehearsed and all that sort of thing, you quite forgot that you were in these terrible circumstances. We were learning a script and getting on with it, and doing our little show. Lots of laughs backstage, and that sort of thing... and it undoubtedly helped us
Post a Comment
Read more
More posts